Ford Mustang Mach-E View our current offer Click Here
View All Offers
Free & Fast Part Exchange Valuations Interested in selling or part-exchanging? Use our tool to find out what your vehicle is worth

THIS NEW BREED OF MUSTANG, IS ELECTRIC.

Built from all the passion of its iconic status, Mustang Mach‑E is a new shape of freedom. Get ready to fall in love with driving all over again.

Discover the Mustang Mach-E with a full guided walk-around tour from Vicki Butler-Henderson: 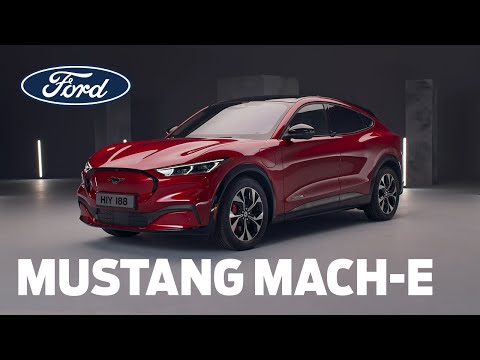 No more trips to the pump!

This is Mustang power reimagined with electric performance and up to 830Nm of torque worthy of the Pony badge.

A spacious interior, with plenty of room to get comfortable, lets everyone enjoy the open road.​

Whether packing for an adventure or packing in the shopping, practical loadspace in both the rear and front of the vehicle gives you versatile storage for all kinds of trips.

[††]Ford Options is a hire purchase agreement with an Optional Final Payment due at the end. Your deposit (maximum 35%) and the Optional Final Payment are deducted from the price of the car. The balance plus interest is then split into equal monthly instalments depending on the length of your agreement. As Ford Options is a mileage based agreement, it is important that your anticipated mileage is reflected correctly as it cannot be changed mid-contract.

[**]Calculated via peak performance of the electric motor(s) at peak battery power. Your results may vary.

[‡‡‡]Ford test data based on testing methodology from a stationary start.

[1]Available as option as part of Tech pack +

[3]Don't drive while distracted. Use voice-operated systems when possible; don't use handheld devices while driving. Some features may be locked out while the vehicle is in gear. Not all features are compatible with all phones. Message and data rates may apply.

There are three main factors that can affect the driving range of the Mustang Mach-E:

Extreme heat or cold temperatures outside have the potential to affect battery range, directly. All electric vehicles (EV’s) have less energy when in cold temperatures compared to warm temperatures due to battery cell chemistry. · Heating and cooling the inside of the vehicle for passenger comfort also has an impact.

Regenerative braking can capture and reuse more than 90% of the braking energy improving the efficiency of the battery and extending the battery range.

What do the experts have to say about the Mustang Mach-E? 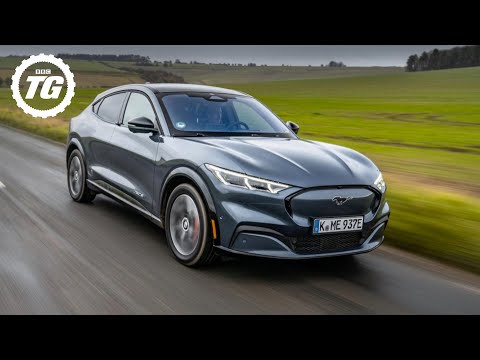 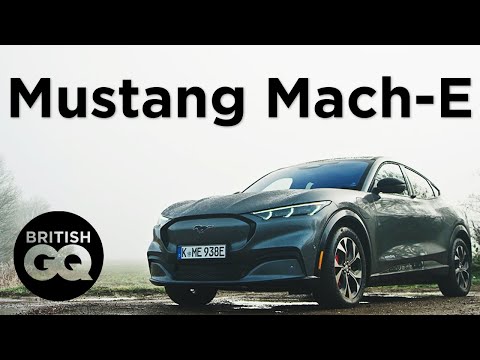 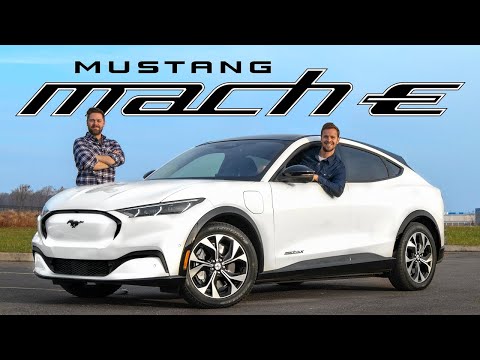 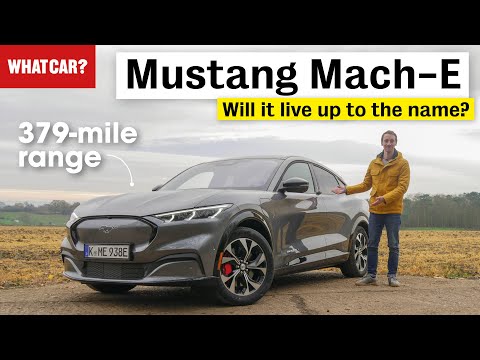 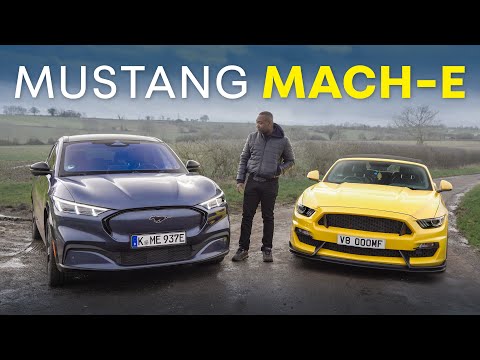 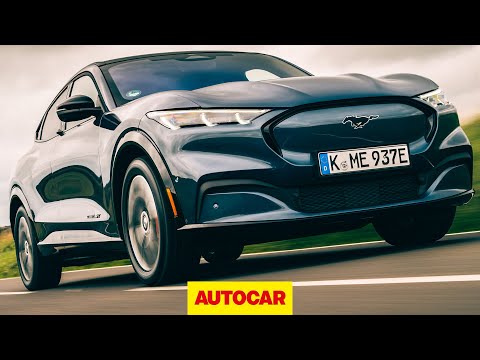 Ford's Mustang Mach-E is at its fastest in GT form. Jonathan Crouch takes a look.

Ford's Mustang Mach-E shows its wild side in this top 487PS GT model. Based on the 'Extended Range' battery AWD variant, it dials up the desirability with a bespoke look inside and out, but more importantly, it gets MagneRide adaptive damping and more pulling power than we've ever seen from a Ford-badged performance car.

Originally, the Mustang Mach-E was to be merely nothing more than a second generation version of Ford's battery electric Focus hatch, which would have been extremely dull. Repackaging the project based on Mustang inspiration was a masterstroke, even if it was likely to upset a few traditional followers of the iconic sports car model. Those kinds of people think Mustang means 'big V8 coupe', but Ford defines this sporty model line more with phrases like 'freedom', 'pioneering spirit' and 'hint of rebellion'.

All characteristics that, to some extent at least, the brand claims are replicated here, especially in this top GT version, which has more pulling power than any car Ford has ever sold in Europe.

All the ingredients seem to be in place here for a really special high performance EV. This GT's starting point is the AWD system and 88kWh 'Extended Range' battery of the top version of the ordinary model, but here, power has been teased out to 487PS and there's more torque (at 860Nm, around 15% more) than Ford offered with its GT supercar. 62mph from rest takes just 4.1s (3.9s from a rolling start) but top speed is limited to 124mph (though that's 13mph faster than the standard model). This is the only Mach-E on which you can have Ford's MagneRide adaptive damping system. The system electronically controls magnetorheological fluid inside the damper to respond in real time to changing road conditions and can seamlessly adjust the vehicle's character in line with the selected drive mode.

The flagship GT variant is recognisable by its special front grille, unique bumpers and 20-inch Cast Aluminium wheels with specially developed tyres and 19-inch red calipers for the bespoke Brembo brakes. Inside, the main cabin difference is the addition of GT Performance seats. Otherwise, the interior is much as in any other Mach-E. Which has a cabin nothing like anything you'll have previously seen on a Ford, dominated by a Tesla-like portrait-style 15.5-inch centre free-standing infotainment touchscreen incorporating a lower rotary dial. This works using Ford's latest SYNC 4 operating system that is able to accept over-the-air updates and can quickly learn your preferences.

There's also a further 10.2-inch screen in front of the steering wheel for all the main driving gauges. A floating, flip-up armrest doubles as a place to store purses or bags. Two adults can be comfortably accommodated in the back. And there's a 402-litre boot (extendable to 1,420-litres if you fold the rear bench). Plus there's a further 81-litre space beneath the bonnet, which is provided in the form of a drainable compartment which would be good for wet or muddy clothing or footwear.

This manically fast flagship GT model costs from just over £67,000, around £10,000 more than the ordinary 'Extended range' AWD model that shares its 88kWh battery and 4x4 system. We detailed the visual changes this GT offers inside and out in our 'Design' section. Otherwise, this GT's key spec addition is Ford's adaptive MagneRide suspension and an extra 'Untamed Plus' drive mode. Otherwise, the equipment tally is the same as that for a conventional 'Extended Range' battery model. Which means you get adaptive LED Mustang signature headlamps, black power-folding mirrors and a 'Blade'-style front grille design. Inside, there's red stitching for the Sensico upholstery, along with 8-way power adjustable front seats and a dark headliner.

The key stat here is driving range, WLTP-rated for the GT at 310 miles. Next, there are issues of charging to consider. As electric vehicle owners do 80% of their charging at home, Ford offers Mach-E buyers a 'Connected Wallbox' option which delivers up to five times the charging power of a typical domestic socket - meaning customers can add an estimated average range of 38 miles per charging hour, based on extended-range, rear-wheel drive configuration. The Ford Home Charge Cable, included with the vehicle, can add an estimated average range of nine miles per charging hour using a typical European domestic outlet.

And when you're out and about? Well with peak charging power of 150kW, a Mustang Mach-E GT variant could add driving range of up to 57 miles within 10 minutes of charge time on a DC fast-charging station. Like all Mach-E models, this ones comes with ultra-rapid charging capability courtesy of a Type 2 CCS inlet. The car's Connected Navigation system will identify up-to-date public charging locations during trips and prompt owners to charge at the most convenient points on each drive - all to help ensure they don't have to be anxious about how much range they have. The brand also gives customers access to the FordPass Charging Network, Europe's largest network of more than 125,000 public charging stations in 21 countries. A Mach-E owner will be able to access any of these and pay for their power from a single account.

The Mache-E is the car that bridges the gap between Ford's past - and its future. Far from killing off the traditional Mustang sports car, this EV will extend that model's life, driving down Ford's across-the-range emissions and making continued production of that classic sports car justifiable. It's difficult to understand why the traditionalists who moan about use of the Mustang name here can't see that. Especially when Ford has also given them this manic GT version.

It's certainly fast enough to match the most frantic of its EV rivals - as it needs to be given the aspirational asking price. But you'll need not to be hung up on the thought of premium cabin quality or a posh badge with an EV of this size. If you don't care about these issues and you're browsing amongst the very fastest contenders in this segment, you might very much care for this car.GT EXPECTATIONS

t the very fastest contenders in this segment, you might very much care for this car.

Vospers Motor House Ltd are a credit broker and not a lender. We are Authorised and Regulated by the Financial Conduct Authority (310773). Finance is Subject to status. Guarantees/indemnities may be required. We work with a number of carefully selected credit providers who may be able to offer you finance for your purchase.